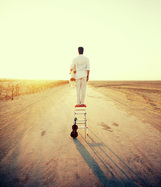 Alexis Leonidou
Alexis Leonidou was born in Limassol, Cyprus in 1984.Having grown up in a family where arts in general played a significant role, it was inevitable not to show great interest in music and the arts from a very young age. While growing up he won almost every major composition competition in Cyprus and upon completing his high school education he enrolled the National Conservatory of Athens in Greece. He graduated on 2007 with a Degree in Harmony and Counterpoint (in Excellence) and also received a Diploma in Voice with honours from the Music Horizon Conservatory of Athens. In addition, his studies include a Diploma from London College of Music at Thames Valley in Music Theory and Literacy (LMusLCM). Since 2008, Alexis Leonidou moved in New York City where he is currently studying Composition at Mannes College for Music under Professor Rudolph Palmer and conducting private lessons with Vincent La Selva at the Juilliard School. He has participated in Master Classes with John Corigliano, Christopher Theofanides, Martin Bresnick, David Loeb, David Tcimpides and Faye-Ellen Silverman. The last three years Alexis has received various scholarships and won various prizes and honourable mentions at international competitions. His versatility as a composer created a portfolio with diversity in music for solo instruments, chamber music, vocal, orchestra with soloists, large ensembles, theatre music and film scores. His works have been performed in Cyprus, Greece, Serbia, Canary Islands, Canada and U.S.A. His upcoming commissioned project (New York 2011) is for a Song Cycle composed for Vibraphone and Soprano for one of the most virtuosic vibraphonists in the world Christos Rafalides.