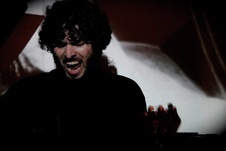 Jay Vilnai
Jay Vilnai's musical journey owes to a unique heritage as a Russian-Romanian-Polish descendant raised in Jerusalem around a mix of contemporary and traditional Jewish and Arab music, with a BFA in jazz and an MM in composition. He studied jazz at the New School in New York, where he graduated with honors in 2003. Vilnai pursued jazz studies with Brad Shepik and Vic Juris, and composition studies with Kirk Nurock and Bob Sadin.  With growing interest in though-composed pieces and concert music, Vilnai completed an MM in composition at Brooklyn College, studying with Jason Eckardt. During his studies he has received the John Cage Award for excellence in Composition. He was also in residence with the college's Contemporary Music Ensemble, directed by Ursula Oppens, and with the conservatory's orchestra, directed by George Rothman. Several of his compositions have been commissioned and performed around the country, most notably CUNY’s CME, OMNI Ensemble, Brandy Chamber Society, Jen Baker and ai ensemble. In his concert music, Vilnai is concerned with music as ritual and social activity, the importance of folk music elements from around the world, the interplay of independent melodic voices and expansive form. As a guitarist, Vilnai has performed with Matt Darriau's Paradox Trio, Aaron Alexander's Midrash Mish Mosh and Romashka, as well as other ensembles in NYC's downtown and world music scenes. He has shared the stage with diverse figures such as trumpeter Frank London, drummer Mike Sarin and the Phoenix Symphony.