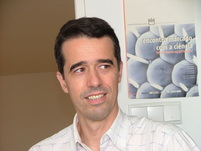 João Pedro Oliveira
João Pedro Oliveira is one of the most prominent Portuguese composers of his generation. He began his music studies at the Gregorian Institute of Lisbon where he studied organ performance. From 1985 to 1990 he moved to the US as a Fulbright student, with a fellowship from Gulbenkian Foundations, where he completed a PhD in Music at the University of New York at Stony Brook. His music includes one chamber opera, several orchestral composition, a Requiem, 3 string quartets, chamber music, solo instrumental music and electroacoustic music. Recently he has been exploring the possibilities of interaction between instrumental and electroacoustic sounds, and most of his recent works use both media. He has received numerous prizes and awards, including three Prizes at Bourges Electroacoustic Music Competition, the prestigious Magisterium Prize in the same competition, the Giga-Hertz Special Award, 1st Prize in Metamorphoses competition, 1st Prize in Yamaha-Visiones Sonoras Competition, 1st Prize in Musica Nova competition, etc.. His music is played all over the world, and most of his works have been commissioned by Portuguese and foreign groups and foundations. He is Senior Professor at Aveiro University (Portugal) and teaches composition, electroacoustic music and analysis. He contributed to the development of a new generation of Portuguese composers, and many of his students already received national and international awards. He published several articles in journals, and has written a book about analysis and 20th century music theory.