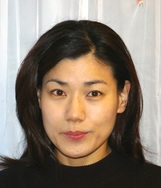 Michiko Kawagoe
Michiko Kawagoe was born in Osaka, Japan, and now lives in Tsukuba. Her works have been performed in the United States, Israel, Germany, England, France, and Japan. They have been broadcast on FM radio in New York, Los Angeles, San Francisco, Portland OR, streams in Russia, and over WDR in Germany. After graduating from Oita Prefectural College of Art (Japan) with a major in oil painting, she received Bachelor and Master of Music degrees with honors from Louisiana State University on full scholarships. In 1995-96, she was enrolled in the special artist diploma course in the Jerusalem Rubin Academy of Music and Dance (Israel) through a grant from the Japan Israel Women's Welfare Organization. In 1998-99 she studied the SYNTAL program with Wayne Slawson at the Computer and Electronic Music Studio of the University of California, Davis. Her works include instrumental and vocal music in addition to electro-acoustic music. She has won numerous awards, including a grand prize in the 10th Miyanichi Music Competition in 2004 in Japan. Her computer music, “Propagation” was included in a CD compilation of the works of 47 women composers and sound designers world wide in the "Women Take Back the Noise" project by Ubuibi, U.S.A. Recently her works for Horn and Organ were premiered by Andrew Joy and Peter Dicke in Germany and works for Shakuhachi, a traditional Japanese bamboo flute, were premiered by the best shakuhachi players in Japan in concerts held at Tokyo Opera City in Japan.