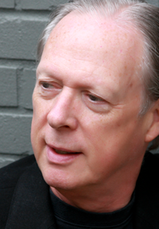 Peter Nostrand
The primary focus of Nostrand’s work is romance. Some of his compositions are traditionally classical, reminding some of Mozart, Beethoven and Schubert. Other pieces are late neo-classical, suitable for big screen romantic film. Recently, Nostrand has composed themes suitable for action movies that remind many of John Williams’ compositions. “All exceedingly exaggerated flatteries”, says Nostrand. His 80 compositions include eleven short piano concertos, a full piano concerto, two symphonies and a variety of other romantic and compelling works. Sixteen of his compositions were performed by the Czech Philharmonic Chamber Orchestra in 2008 and were recorded in the famous Hostivar Studio in Prague. These will hopefully be the focus of an upcoming PBS special. Music critic Donald Rosenberg of the Plain Dealer (Cleveland, OH) wrote a review of the 2009 Valentines’ Concert by the Cleveland Pops in Severance Hall. The program featured works by composers such as Irving Berlin, Cole Porter, George Gershwin and newcomer Nostrand. Despite this lineup, Rosenberg described Nostrand’s music as “romantic” and “tender”, noting that the orchestra played Nostrand’s compositions “as if they were the most luscious music of the night”. To an NBC reporter in Washington in 2008 who did a special on his music, Nostrand’s compositions constitute “simply beautiful music.” To an advanced class of future composers at the Universitat fur Musik, Institut fur Komposition, University of Vienna, Austria, the students found the music to be “tasteful”, “cheerful”, “very cinematic” and “between Hayden and Hollywood”. The senior professor described the music as “absolutely honest”, “noble” and said it “stands consciously beyond time and the world in all her problems”. His compositions have been called touching and adventuresome. At a minimum, they simply make you feel better than before. More often, his musical short stories take you on uplifting adventures already vaguely familiar to you, except that you set the situation and the players in the story. While his music will not make you dance, it will carry you away. His father taught Peter to read and write music at the piano when Peter was five. Instead of playing baseball, Peter would pretend to conduct in the basement, playing a 78 speed recording of Mozart’s Jupiter Symphony, following along with waving arms using an orchestral score given to him by his father. He began composing and interpreting music throughout his secondary school years. Nostrand continued playing and composing thru his years at Amherst College, performing in a small rock band called the Flower & Vegetable Show. Its lead singer was Steve Collins, later the lead actor in Seventh Heaven and a familiar face in other Hollywood and Broadway productions. Within months of graduation, Nostrand married and, within a little over a year, became a father. The need to feed, clothe and educate pushed music composition aside. About 40 years later, Nostrand retired as Chairman, President  & CEO of SunTrust Bank in Washington, DC. He had worked for the bank for 33 years. A retirement goal was to return to the keyboard. Instead of focusing on playing pieces composed by others, he began to hear his own melodies which he recorded on score paper, just as his father had taught him 50 years earlier. The melodies come involuntarily. Many say Peter has gift. Peter sometimes says he is a prisoner to what he hears and is compelled to write. Often he uses a pocket tape recorder to capture his musical stories when there is no piano around. Peter came to the realization that he was more of a composer and less of a pianist. The piano was the medium through which he creates his musical adventures. This was a major revelation. Now, over 80 compositions later, he has recommitted himself to composition. He has a seemingly bottomless well of musical ideas, inspired by the bumps and bruises of over 60 years of life. People easily relate to Nostrand’s music since it takes the listener on a musical journey with which the listener is already familiar. Unlike written adventures, Nostrand’s musical stories allow the listener to do his or her own casting and to create the situation in which their characters perform. Listeners become the controlling participants in the stories, allowing them to bring clarity into their lives, its joys and disappointments, and to emerge with a greater degree of renewal and self-understanding. This is the core appeal of Nostrand’s music. Nostrand holds a Premier Degré from the University of Paris, a bachelor’s degree from Amherst College (1969) and a master’s degree from the University of Virginia (1973). He has also studied at the Ecole des Sciences Politiques in Paris and recently completed a term of music studies at Oxford. Mr. Nostrand and his wife Nancy live in Virginia south of Washington and have six children and five grandchildren.