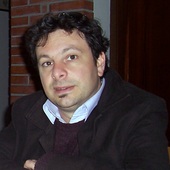 Mark Viggiani
Viggiani's most recent works include One Last Tango, performed by Orchestra Victoria under Richard Mills and Lomax Sketches for the Tasmanian Symphony Orchestra. Other significant compositions include Magenta for orchestra, Some Common Prayers, composed for the Song Company, to texts by Michael Leunig, and Aus Der Munitionsfabriken for Speak Percussion, which was premiered at the 2007 Big West Festival. His most recent commission is John the Revelator, composed for the Mons Kinky Pinky Orchestra (Belgium). A capable classical guitarist himself, Viggiani has created a large body of guitar music ranging from solos to mixed ensemble pieces, including a Concertino for guitar and strings. Black Cat Tango, in its various forms, has received much radio play in Australia and Europe. It has been arranged for Amsterdam-based guitar duo Z.O.O. Duo, who recorded the work on A Sympathetic Resonance in 1998. He has also enjoyed success as a performer in his own right, releasing a CD of original compositions The Rainmaker (Move Records, 1997) to international critical acclaim. Viggiani studied composition in Melbourne with Mark Pollard and Stuart Greenbaum, and with Giulio Castagnoli in Torino. He is currently completing a PhD in composition with Elliott Gyger at the University of Melbourne with the assistance of an Australian Postgraduate Award. He also tutors at Melbourne in music languages, composition, guitar studies and orchestration.